The warm spell between the polar vortex and its little brother provided an opportunity for another visit to Des Moines River SNA. For the first time in 16 months the snow here is deep enough and firm enough to snowshoe.

Christianna Bridge Public Water Access, the unofficial parking area for this site, is a popular destination year round, especially on weekends. When I pulled into the snow-covered parking lot there was a Pickup with a very long snowmobile trailer already there. While I strapped on snowshoe    s I was greeted (scolded?) by the screech of a Red-tailed Hawk. This may be the same hawk, the only hawk, that I see every time I visit Des Moines River SNA. As I headed up the bluff to the SNA four more pickup trucks, two towing ATVs and snowmobiles, pulled into the parking lot. I turned north. 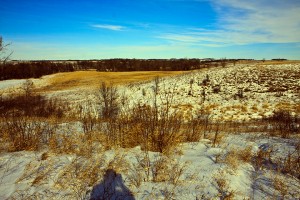 A small herd of 11 whitetail deer were in the wooded area adjacent to the intermittent stream just north of the parking area. When they saw me they ran, apparently heading for the larger woods to the north.

Snow is firmly packed over well-travelled deer trails. On this day it was often firm enough to support my weight. Where practical I followed deer trails. Many of the trails were fresh. Others were completely buried by the recent snow and appeared as narrow strips with slightly less grass protruding from the snow. 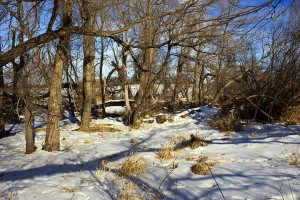 I avoided most of the wooded area and turned west when I reached northern boundary. A fire break was cut through the willows along the north boundary making travel through this section much easier. As I followed the fire break Ring-necked Pheasants were flushed in groups of mostly 2 or 3. Between the woods on the west and County Road 79 at the eastern boundary I (inadvertently) flushed at least 25 pheasants, possibly as many as 40. I was careful not to double count any birds. 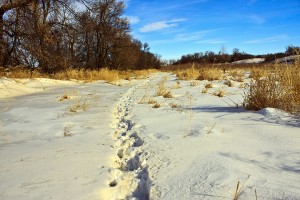 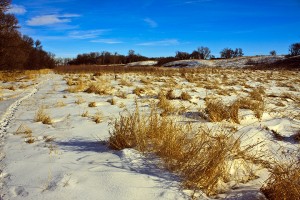 I turned south at the “mother of all deer blinds”, a large, four-walled platform atop a 25′ high, 18″ in diameter pole. I followed the east boundary until I got to “Mirabilis Way”, a narrow strip of land leading ¼ mile to the SNA’s official parking spot on the shoulder of County Road 79. I gave the corridor that name because it is densely choked for almost its entire length with white sweet clover and yellow sweet clover. I turned east here following an old roadbed as far as it went. I crossed the intermittent stream, turned southwest, and headed back to the parking area. 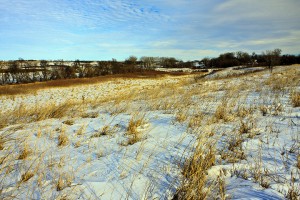