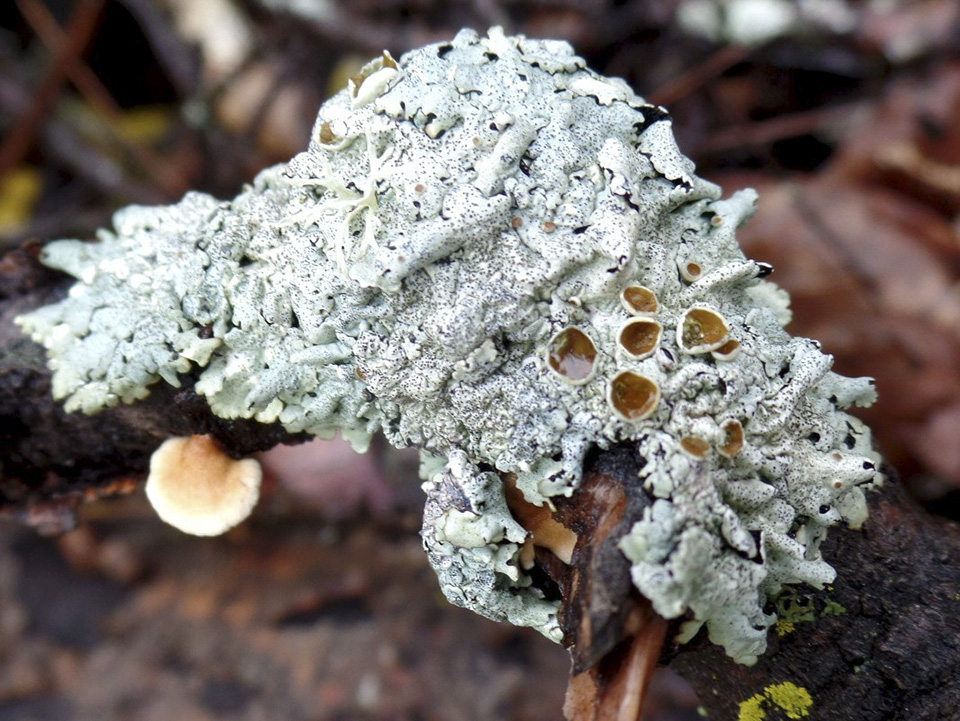 American Starburst Lichen (Imshaugia placorodia) is found in the United States from Maine to Minnesota and south along the foothills of the Appalachian Mountains, in the northern Great Plains, the central and southern Rocky Mountains, and the southern Intermountain Region in the southwest. It grows on the bark of pine trees. It is almost restricted to pitch pine, jack pine, and Virginia pine in the east, and to ponderosa pine and Douglas fir in the west. It is rarely found on oak. In Minnesota it is found only on jack pine.

American Starburst Lichen is identified by its leaf-like growth; grayish-green upper surface that usually has black, pinprick-like dots across the surface and on the margins; brown, spore-producing cups that are sometimes abundant enough to conceal the leaf-like base; and its occurrence restricted to jack pine bark. 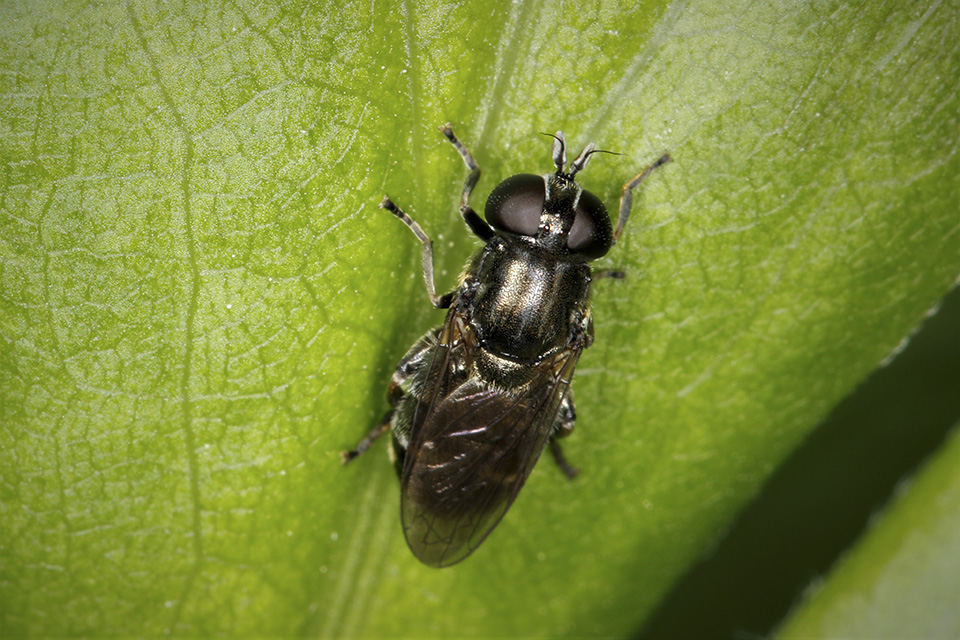 Eumerus is a genus of small hoverflies in the family Syrphidae. With 281 known species, it is one of the largest genera of flies. It is found throughout the Palearctic realm, which includes Europe, Asia north of the Himalayas, North Africa, and the northern and central parts of the Arabian Peninsula. Several Eumerus species have been introduced into North and South America. Three of these are known to occur in the United States: lesser bulb fly (Eumerus funeralis), narcissus bulb fly (Eumerus narcissi), and onion bulb fly (Eumerus strigatus). Collectively, they are known as lesser bulb flies.

Adult lesser bulb flies are black tinged with bronze. They have pale longitudinal stripes on the thorax and silvery-white stripes on the abdomen. The larvae are considered pests. They tunnel into plant bulbs, causing the bulbs to rot. The bulb either dies or produces stunted growth in the following growing season. In some areas, up to 25% of narcissus bulbs are infected. 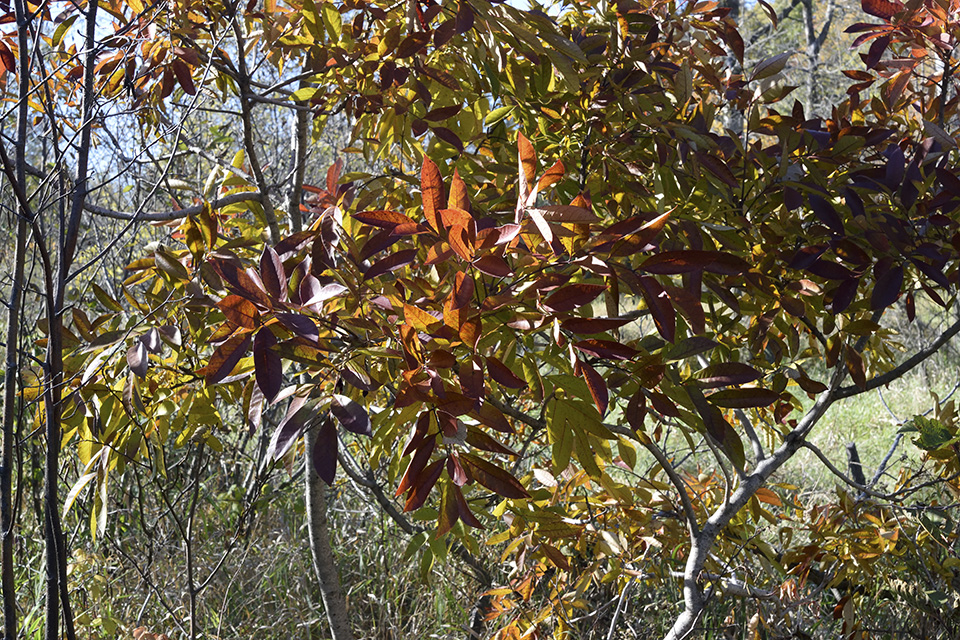 Poison sumac (Toxicodendron vernix) is unfamiliar to most hikers because it grows in swamps, marshes, and wet meadows, places that most hikers avoid. In Minnesota, it is found only in nine east-central counties.

The saps of poison sumac, western poison ivy, and eastern poison ivy all contain the allergenic urushiol. Not all people are allergic to urushiol, but most can become allergic if they are exposed to it. It usually takes 12 to 48 hours for a rash to develop on a previously sensitized person. In some individuals, a single exposure will cause a reaction. In these individuals, the rash will develop in seven to ten days. The lesions last 14 to 20 days. Rashes do not spread and are not contagious. Treatment can dry the blisters, reduce the swelling, and relieve the itching, but it will not speed the healing. 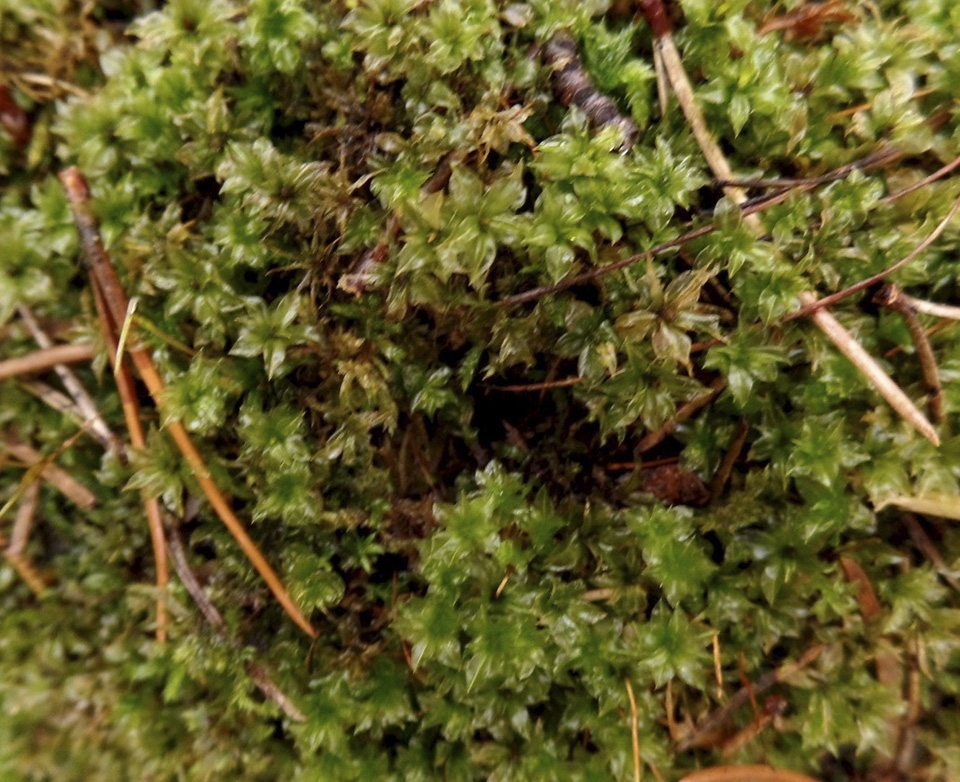 There are 189 species of Funaria. Only two have been recorded in Minnesota. Bonfire moss (Funaria hygrometrica) is the most abundant species of Funaria and one of the most common and widespread mosses in the world. It frequently occurs in waste areas, and is especially common in recently burned areas and around campfire rings. It is also found in natural areas in swamps, fens, meadows, cattail marshes, and wet prairies. It grows in dense tufts and often forms extensive turfs. The tufts are soft to the touch.

The plant consists of a short leafy stem and a spore capsule at the end of a long slender stalk. The leaves are clustered at the top of the stem forming a rosette. They have only one layer of cells and are almost transparent. The stalks supporting the spore capsule nod at the tip. They readily absorb moisture from humid air, twisting as they do, and becoming entangled with other stalks. The spore capsules are relatively large and appear earlier in the year than those of most mosses. Spores are dispersed late spring to mid-summer. 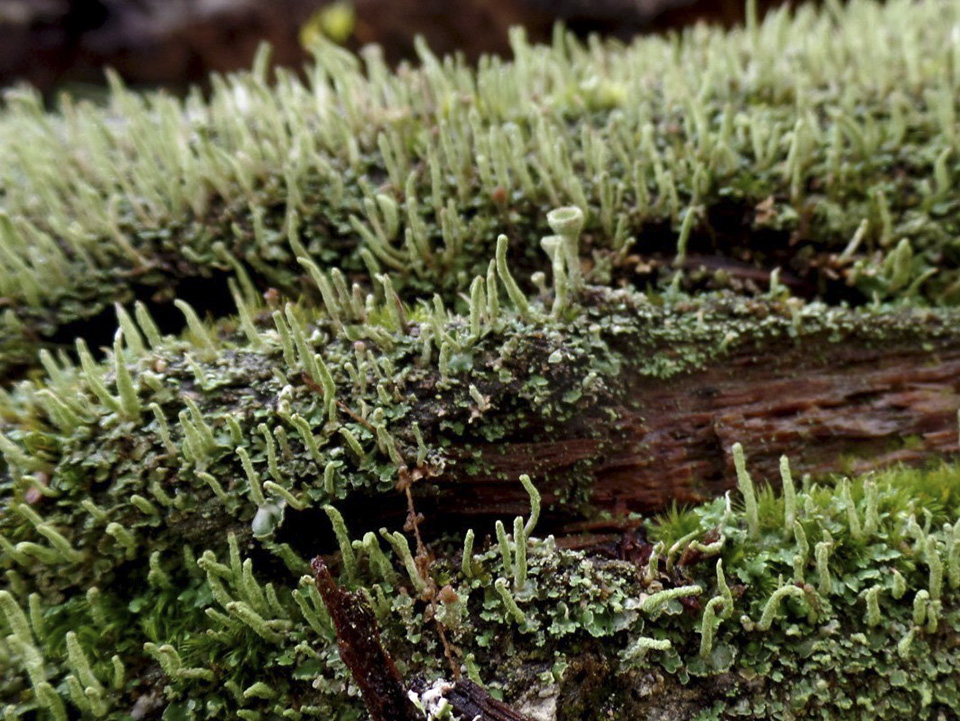 Common Powderhorn (Cladonia coniocraea) is a widespread and very common lichen in Europe, Asia, and North America. In the United States it is found from the east coast to the Midwest, including Minnesota, on the west coast, and in the Rocky Mountains. It grows in the shade on decaying stumps and logs and often at the bases of trees. It is resistant to pollution and can be found in urban areas.

Common Powderhorn produces two types of green to grayish-green vegetative growth: a flat, overlapping, leaf-like scale that adheres closely to the substrate; and a slender, hollow, vertical stalk with a pointed tip. The undersides of the basal scales are white because they lack a protective outer coating. The surface of the stalk is mealy due to a covering of tiny reproductive granules. 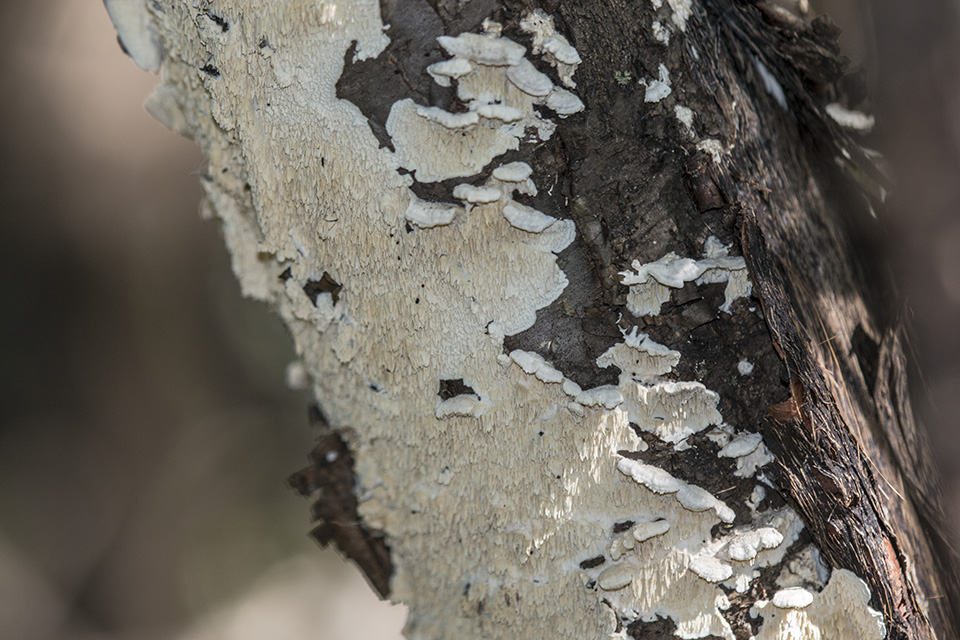 Milk-white Toothed Polypore (Irpex lacteus) is widespread in Europe and North America. It is very common in the eastern United States to the Midwest, including Minnesota, but rare in the Southwest. It is exceptionally resistant to pollution toxicity. It grows on the bottom and sides of logs and fallen branches of hardwood trees.

The fruiting body is a stiff, dry, flat, spread out patch of spore surface attached directly to a branch or log. When growing on the side of a log or branch it may develop shelf-like, ⅜″ to 1½″ wide caps. The white, off-white, or cream-colored patches often fuse together creating a long row. There are 2 or 3 pores every thirty-second of an inch. The pore walls are thin and disintegrate unevenly. Eventually, only flattened, tooth-like projections less than ¼″ long remain. The flesh is thin and tough. It is not edible. 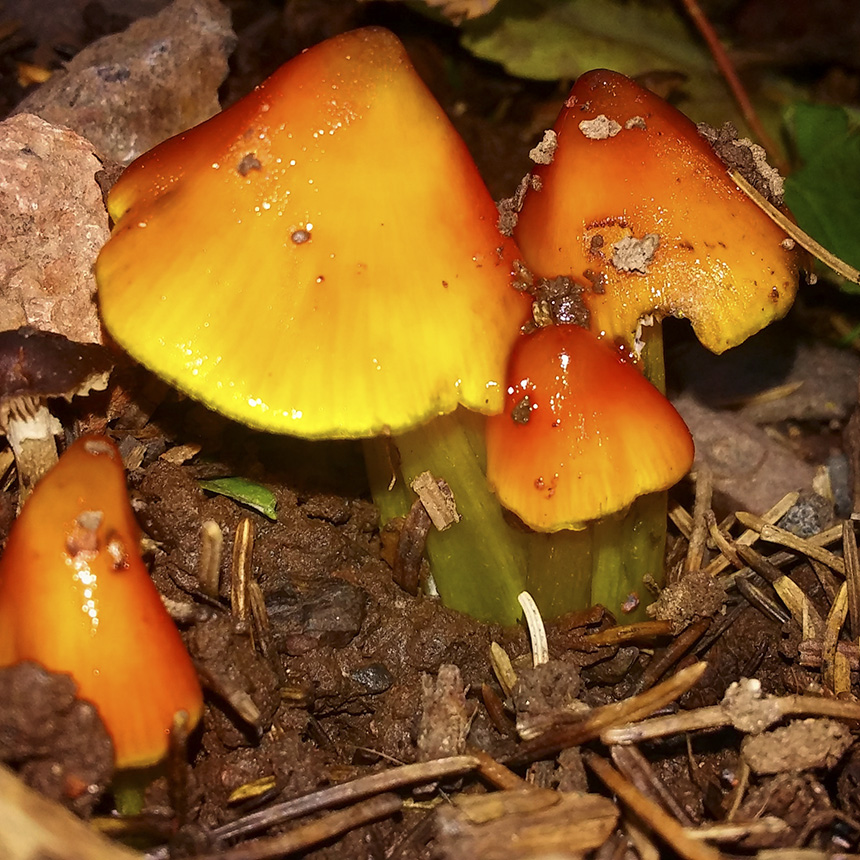 Witch’s Hat (Hygrocybe conica) is a small waxcap mushroom. It is common in Minnesota in deciduous and mixed woodlands. It grows on the ground in damp soil, alone, scattered, or in groups under hardwood trees, especially oak. In other areas it is also found under conifers and in grasslands.

When it first appears the cap is sharply cone-shaped and usually bright orange, sometimes bright red. As it ages fades to yellow or orangish and flattens out but retains a pointed raised center. Older caps develop black areas and eventually turn completely black. All parts of the mushroom turn black when bruised. The stalk usually grooved, often twisted, and never slimy.

Witch’s Hat was once considered poisonous due to four reported deaths in China, but those reports are now thought to be mistaken. It may be somewhat psychoactive. Eating it is not recommended. 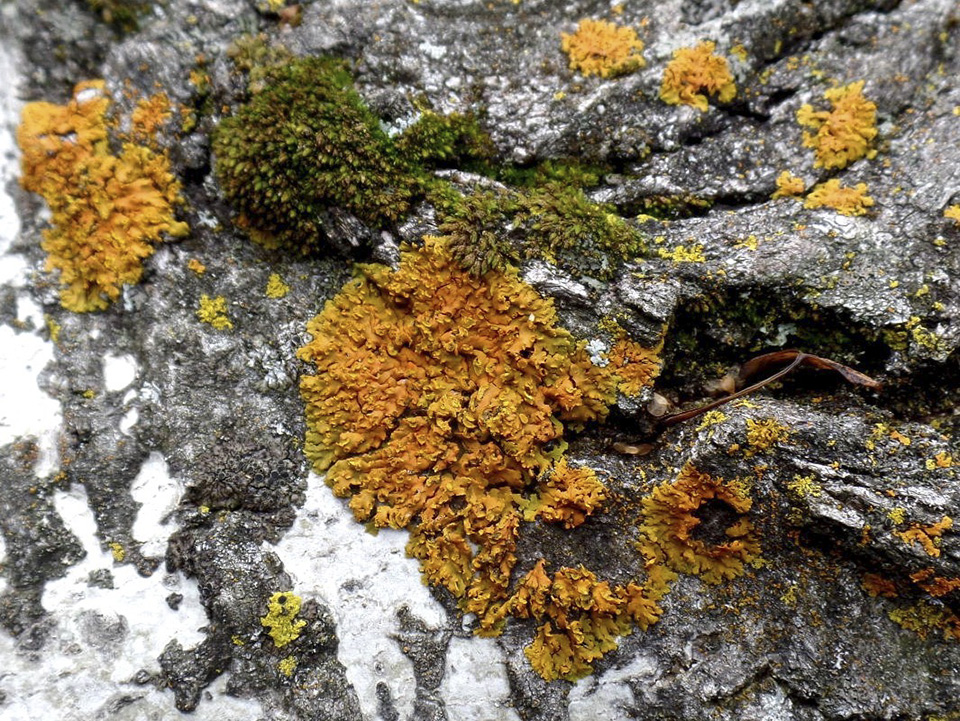 Elegant Sunburst Lichen (Xanthoria elegans) is an extremely widespread and very common lichen. It grows on rocks in humid to dry micro climates on all continents except Australia. It is common on rocky shores, especially where bird droppings provide nitrogen for its sustenance. It is very common on the rocky shores of Lake Superior.

Elegant Sunburst Lichen is very long lived and very slow growing: it grows at a consistent rate of 1 ⁄64″ per year for the first hundred years before slowing down a bit. The color of the upper surface varies with the amount of available moisture : in streams it is yellowish-orange, on rocks out of water it is orange, and in dry areas it is dark reddish-orange.