Today is the first day in four and the last day in ten with a daytime high temperature in the Twin Cities above 20°F. On January 25 the daytime high temperature was 24°F. According to the Web site Weather.com it will snow tomorrow then get cold and stay cold for the next ten days. Beyond that Weather.com does not have a prediction. If I want to get outdoors, today is the day. I do, and I did.

A thin layer of cirrus clouds filtered the sun when I arrived at Fort Snelling State Park a little after noon. I went into the park office to get a map and talk to the park ranger on duty. The woman behind the counter said that the trails were groomed and snowshoes were not necessary. She also said that on Pike Island the inner trails were open but the outer trails, those nearest the Minnesota River, were closed. The best place to photograph the river would be Picnic Island. That is where I headed next. 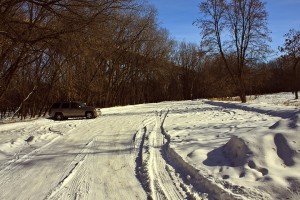 I parked in the northernmost lot on Picnic Island, turned on my Garmin GPS, and headed north to the New Hope Trail. No, I was not afraid of getting lost in this small suburban oasis. I keep a GPX track of every hike. 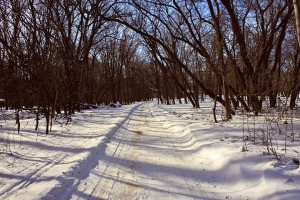 The trails are well packed with just two to three inches of loose snow on top. I left the trail and approached the picnic shelter near the west end of the island. Two Wild Turkeys emerged from the woods about 100 yards to the west. I stopped and watched as a long line of ten turkeys slowly walked from the woods to the frozen river. The lead turkey had a waddle that swung from its neck almost to the ground. Less than a minute after the last turkey cleared the woods three whitetail deer emerged at the same spot. They looked around then took the same path as the turkeys to the river. They were followed closely by a group of six more deer. When the last of the deer was out of site I started back to the trail, not wanting to spook the wildlife. 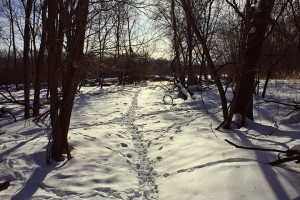 I needn’t have worried about spooking the deer. Fifteen minutes leaving the picnic shelter area I passed another small group of whitetail deer in the woods not more than 20 feet northeast of the trail. Three were standing and watching me closely, two were lying down and ignoring me. Not wanting to spook them I did not slow my pace and I looked at them mostly with my peripheral vision. 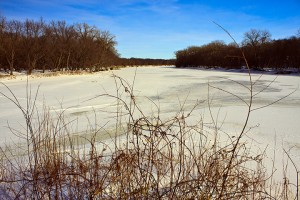 After my hike on my way out of the park, just west of the park office, I saw another large group of Wild Turkeys. There were at least 25 turkeys in the woods just north of the park drive. 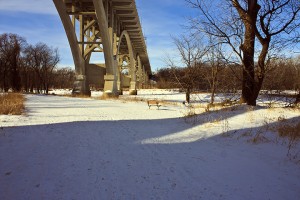