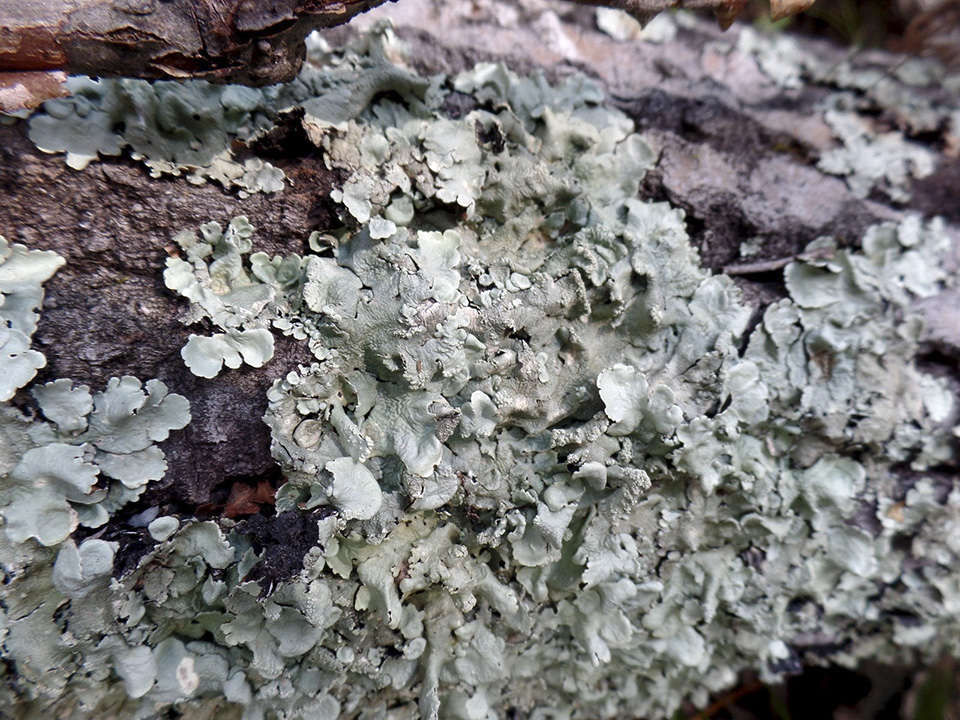 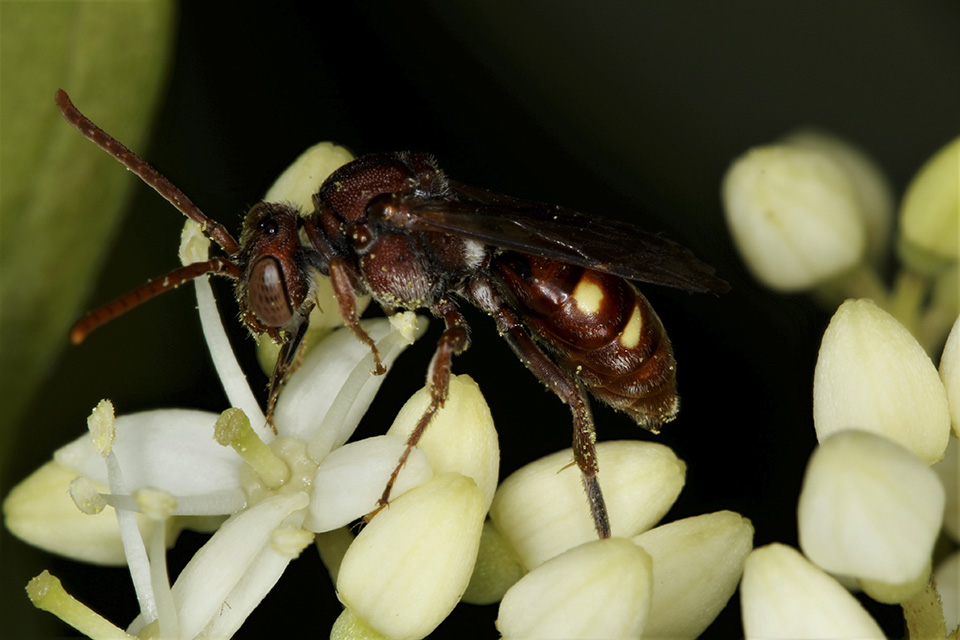 There are more than 850 species of nomad bee (Nomada sp.) worldwide, more than 280 species in North America. Like other cuckoo bees (subfamily Nomadinae), nomad bees do not construct nests, but lay their eggs in the nests of ground-nesting bees. One to four eggs are laid in the cell wall of the host nest. The larvae have large, outward-facing, scissor-like mandibles. The first larva to emerge destroys all the other eggs, both those of the host and those of its own siblings. It consumes the pollen provisioned by its host, and emerges as an adult the same time as the host adults emerge.

Nomad bees are usually black, black and red, or entirely red, with yellow, white, and/or red markings. Many species have red legs. The genus Nomada includes the only bees in North America that are entirely red. They have short, thin, and inconspicuous hairs on the body and no pollen-collecting hairs (scopa) on the hind legs. They look more like wasps than a bees. 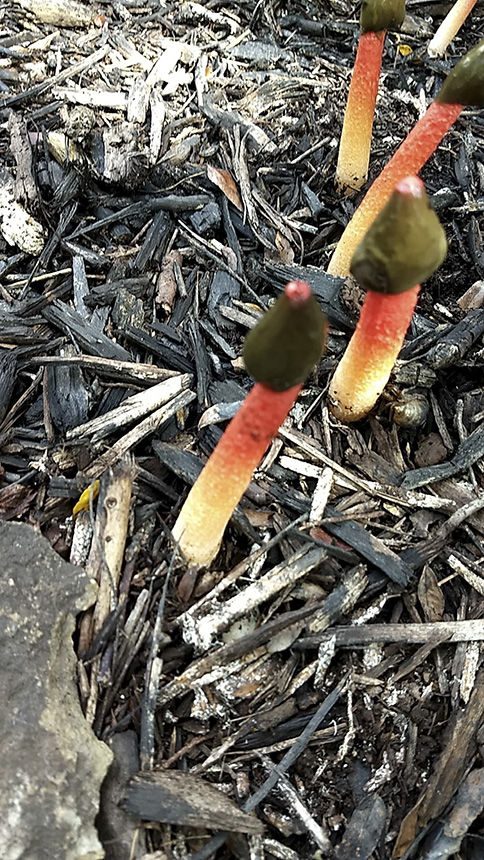 Devil’s Stinkhorn (Phallus rubicundus) is native to the subtropical region of northern Africa, Australia, South America, northern Mexico and southern United States. It has spread throughout the eastern United States, probably in wood chip mulch imported from those regions. It is now common east of the Great Plains. It is found from spring through summer in lawns and gardens, especially where wood chip mulch is used. It grows on the ground, in wood chips or sawdust piles, singly or in groups.

The fruiting body at first is whitish to pale brown and egg-shaped, and resembles a puffball partially submerged in the ground. Inside the “egg” there is a gelatinous layer, a spore mass, and all of the fully-formed parts of the mature stinkhorn. When conditions are right the “egg” ruptures and expands rapidly. In one or two days it produces a distinctly phallic structure with a stalk and thimble-like head. The rapid expansion is possible because all of the parts are fully formed and compressed inside the “egg”, and because the individual cells elongate, rather than new cells being produced. As the stinkhorn expands the gelatinous layer mixes with the spore mass producing a shiny, putrid slime that covers the cap. The foul-smelling slime is irresistible to flies, which feed on it, lay their eggs in it, and transfer spores when they fly to other stinkhorns. 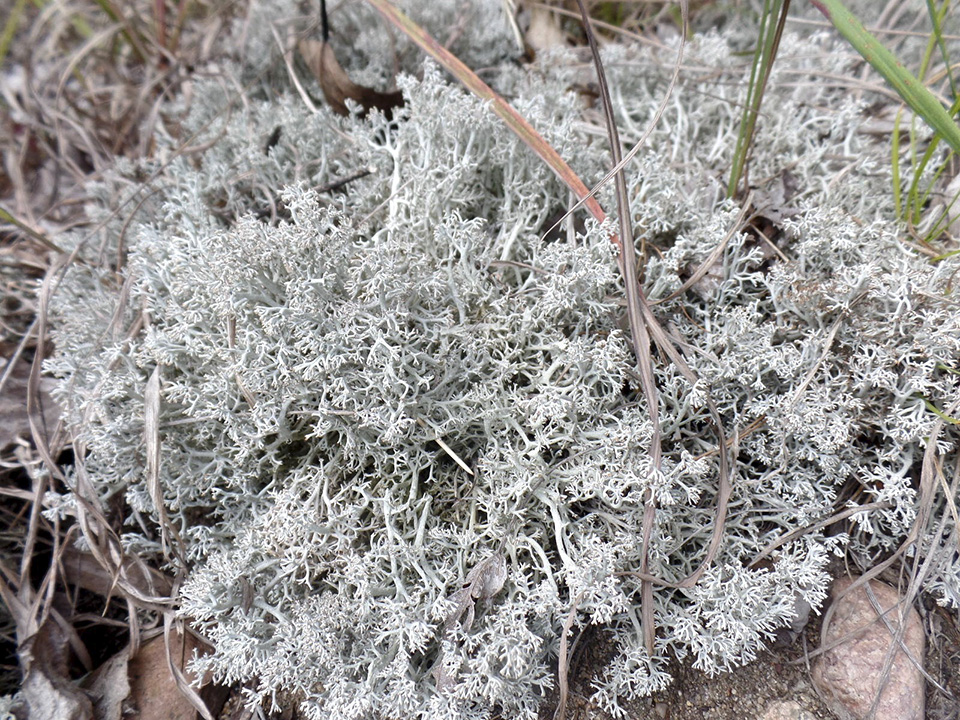 Reindeer lichens are the primary source of food in winter for caribou (reindeer), hence the common name Reindeer Lichens. They are long lived, surviving 100 years or more, and they are slow growing. A clump crushed by a footprint may take decades to recover.

Green Reindeer Lichen (Cladonia mitis) is very common in Alaska, throughout Canada, and across the northern United States except in the Pacific northwest. It is especially common in white spruce and black spruce forests. It forms dense mats with other reindeer lichens that can form a continuous carpet on the forest floor. A single clump often contains more than one species of reindeer lichen.

Green Reindeer Lichen is similar in appearance to Gray Reindeer Lichen (Cladonia rangiferina). The terminal branchlets of the former spread in all directions, while those of the latter are swept in one direction.