The Minnesota DNR hosted the annual Potluck for the Scientific and Natural Area site stewards at Itasca State Park. Though scheduled well in advance they could not have chosen a better weather day. Following the frigid subzero temperatures of the polar vortex this was the first day of the new year that saw daytime temperatures climb above 20°F. Attendance seemed to be up over 2013 despite roads that were slick in some areas. It was fun meeting other site stewards and sharing impressions of their SNAs. 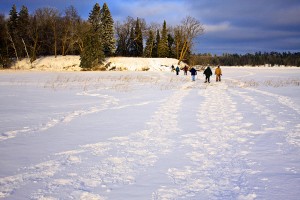 After two hours of socializing we broke into groups and headed out to visit SNAs. Two groups went to the La Salle Lake SNA. One group went to the densely wooded section east of the Mississippi River. The second group went to the bluff south of the river where there is a spectacular overlook with a view of the Mississippi River valley. The third group included Peggy Booth, DNR Scientific & Natural Areas Program supervisor, and was led by Kelly Randall, DNR SNA outreach coordinator. Kelly and Peggy were on skis, the rest of us on snowshoes. We skied/snowshoed to the Itasca Wilderness Sanctuary SNA. 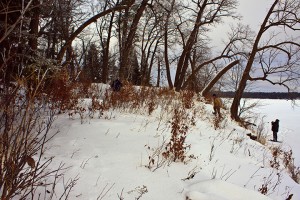