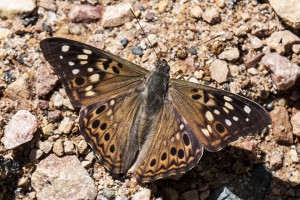 Hackberry emperor (Asterocampa celtis) is a medium-sized brushfooted butterfly, with a wingspan of 2″ to 2⅞″. It is common in the southern half of Minnesota where it’s host species, northern hackberry, is also found. Though common it is sometimes overlooked due to its tendency to fly around the tops of trees. Adults can sometimes be found perched head down a tree trunk or the side of a building. Males are attracted to bright colors and can be lured with red and white paper. 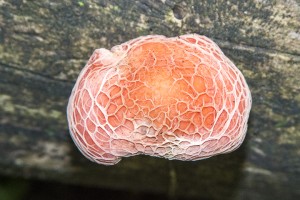 Wrinkled Peach (Rhodotus palmatus) is a small to medium-sized, easily recognized but infrequently found gill mushroom. It is found scattered or in small groups on fallen, rotting hardwoods, especially on elm but occasionally also on basswood and maple. Before the middle of the twentieth century this mushroom was rare in North America. With the advance of Dutch elm disease the number of dead elms has greatly increased as has the population of this mushroom. There are no similar species. The lightly-colored netted surface is distinctive. 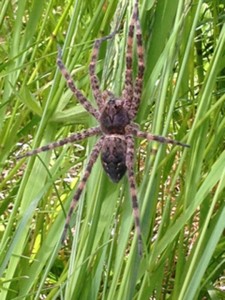 Dark fishing spider (Dolomedes tenebrosus) is a large, robust, nursery web spider (family Pisauridae). The common name is misleading, as this spider is most often found in deciduous forests, often far from water.

This is the largest fishing spider (genus Dolomedes). The adult female body can be up to 1″ long with a legspan of over 3″. The male is about half that size and one-fourteenth the weight. The body is light brown with dark markings and the legs have alternating light and dark bands.

The male never survives the mating process. This is not because it is killed by the female, as with black widow spiders. The male has evolved to die spontaneously after mating, providing the female with a meal to nourish her eggs.

Fishing spiders are similar to, and often mistaken for, wolf spiders. They are distinguished by the arrangement of their eyes and the mode of perching. Dark fishing spider is similar in appearance to striped fishing spider (Dolomedes scriptus) but is larger and has less white marking on the abdomen. 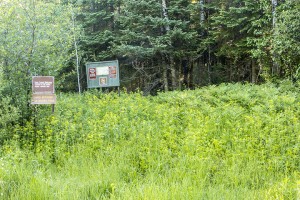 Blackhoof River WMA was created around 1991 to protect an important whitetail deer wintering site and portions of the Blackhoof River and Nemadji River corridors. It contains the confluence of the two rivers, about three miles of each river’s corridor, and the broad upland between.

The flat to gently rolling uplands are dissected by the deep valleys of these rivers, and by several ravines created by Deer Creek and other unnamed connecting streams. Areas of old growth forest remain in the river bottoms. There are 18.6 miles of wide hunter walking trails, mostly on the uplands, that are mowed every year.

Visitors this week (6/14 to 6/20/2015) will find bunchberry at its peak, and Canada anemone and downy arrowwood in bloom. 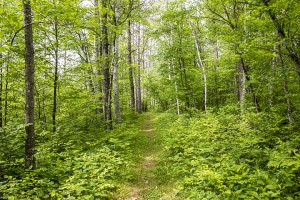 In 1943 the 18,000-acre St. Croix Recreational Demonstration Area became Minnesota’s twenty-fourth state park. Additional land acquisitions have since made St. Croix State Park Minnesota’s largest state park, with over 34,000 acres. There are 127 miles of hiking trails, though most of those are shared with horseback riders. Most of the park is oak woodland, but closer inspection shows it to be a mosaic of 27 different native plant communities, including a rare jack pine barrens. Fourteen plant species with protected status in Minnesota are found here, including butternut, American ginseng, and Hill’s thistle.

Visitors to the park this week (June 14 to 20) will see Canada mayflower and Allegheny blackberry at their peak, as well as many white admiral and silvery checkerspot butterflies. 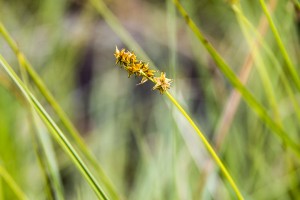 Sterile sedge (Carex sterilis) in Minnesota occurs only in wetlands, usually in alkaline rich (calcareous) fens but also in calcareous wet prairies. When it is found it is often the dominant species. However, it is classified as threatened in Minnesota due to continued loss of its preferred habitat.

Sterile sedge forms dense tufts of many plants. The slender, grass-like leaves are up to 10″ or more long, no more than ⅛″ wide, and are folded like a fan. The stems are stiffly erect, triangular in cross section, brown at the base, and up to 29″ long. The inflorescence at the end of the stem has usually four easily distinguished spikes. The inflorescences are highly variable. The terminal spike is usually all male (staminate) or all female (pistillate) but may include some flowers of the opposite sex. Some plants have all staminate spikes, some have all pistillate spikes, and sometimes a few flowers of the opposite sex are scattered on some of the spikes. The common name of the plant refers to the fact that some clumps are all staminate, do not produce seed, and are therefore sterile.

Sterile sedge is similar in appearance to, and easily confused with, interior sedge (Carex interior). The two species often appear at the same site. However, interior sedge is less stiffly erect, has even narrower leaves, and usually has only three spikes per stem. The terminal spike of interior sedge has a narrow, club-shaped, staminate portion at the base that is as long as the broad, star-like, pistillate portion. 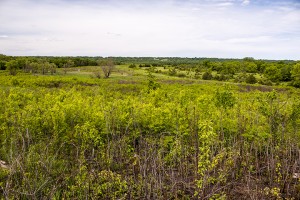 During the last ice age eleven thousand years ago the Laurentide Ice Sheet covered all of what is now Minnesota except for the driftless area in the southeast and the inner coteau in the southwest. As the glacier retreated, meltwater flowing off of the Des Moines Lobe formed Glacial Lake Agassiz. The lake drained to the southeast through Glacial River Warren. Where it flowed through this part of Redwood County the river was over 1½ miles wide and covered almost all of this SNA. Only three tiny islands remained above water. On March 15, 2005, 317 acres of prairie, oak woodland, and floodplain forest in Redwood County was designated Cedar Mountain Scientific and Natural Area.

The northernmost part of the SNA is in the Mississippi River floodplain. It contains a silver maple floodplain forest and two shallow lakes. South of the lakes, at the western edge of the SNA, trees and shrubs have been removed to establish a rock outcrop prairie. South of the floodplain forest is a mature basswood-bur oak forest and a sliver of dry, rock outcrop prairie. The three islands in the River Warren are now knobs of bedrock outcrop in this section. The knobs contain unique rock types and rare plant species. The lower, middle section of the SNA is mostly mesic prairie and a very small rock outcrop prairie. The south section is more basswood bur-oak forest. Wabash Creek separates this section from 320th Street on the south border of the SNA.