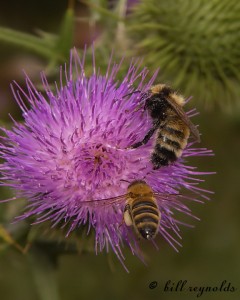 Northern amber bumble bee (Bombus borealis) is a large, frequently found, colonial, ground-nesting bumble bee. It is found in woodlands from May to September. The abundance of this species has decreased 7.11% across North America when comparing historical records (1802 to 2001) to current records (2002 to 2012). This is not considered a serious decline and supports the International Union for Conservation of Nature and Natural Resources (IUCN) ranking of Least Concern. In Minnesota, the story is a little different. The extent of occurrence (EOO) of this species in Minnesota has contracted significantly. The historical EOO shows the range to include all but the far southwestern corner of the state. The current EOO shows no occurrences south of a line from the North Metro area in the east to Breckenridge on the western border.