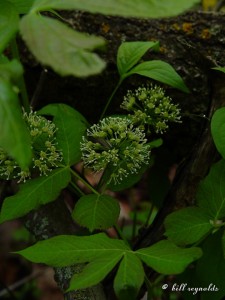 This spring wildflower is found in moist to dry woodlands and thickets throughout Minnesota except for the southwest corner. In early spring it appears as three reddish-green compound leaves held parallel to the ground at the end of a 12″ to 24″ long stalk rising from an underground stem. Each leaf has five leaflets and the plant is easily mistaken for shagbark hickory. Later in the spring it produces usually three globe-shaped flower clusters on stalks that also rise from the underground stem. The flowering stalks are shorter than the leaf stalks and the flower clusters are usually hidden beneath the leaves. At flowering time the leaves are green with no trace of red.