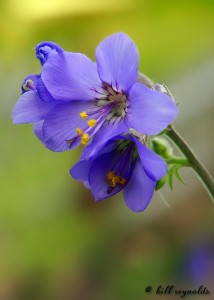 There are only five known locations where western Jacob’s ladder (Polemonium occidentale ssp. lacustre) can be found today. Three of those locations are in Minnesota and two are in Wisconsin. The species is restricted to openings in conifer swamps that have a blanket of sphagnum and other mosses and are dominated by northern white cedar and sometimes tamarack and/or black spruce. It rises on a single erect stem. The leaves have up to 27 narrow leaflets that resemble a ladder. The blue flowers can be seen from late June to July.