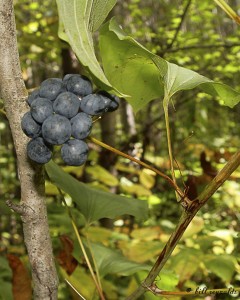 There are seven species of carrionflower (Smilax) found in Minnesota. Blue Ridge carrionflower (Smilax lasioneura) is by far the most common and widespread. It is found throughout the state in woodlands, woodland borders and openings, thickets, fencerows, roadsides, and other open areas. The seven species are differentiated by the stem, the tendrils, the length of the leaf stalk, the hairiness of the leaf, and the length of the flower cluster stalk. Blue Ridge carrionflower has a non-woody, easily crushed stem with no thorns or bristles; long, conspicuously curled tendrils in almost every leaf axil; a leaf stalk that is shorter than the leaf blade; hairs on the veins of the lower leaf surface; and a flower cluster stalk that is 1 to 5 times as long as the stalk of the subtending leaf.