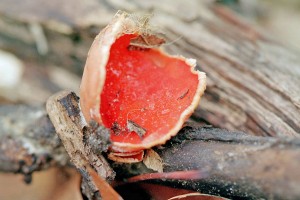 Scarlet Cup (Sarcoscypha austriaca) is a common and widespread mushroom in eastern hardwood forests. It is one of the first splashes of color to be seen in the woods in early spring. It grows on buried or fallen twigs and branches of willow, maple, locust, and speckled alder. It is part of a species complex that includes Sarcoscypha austriaca, Sarcoscypha coccinea, and Sarcoscypha dudleyi. The three species are indistinguishable except by microscopic examination of the spores and the hairs on the underside of the cup. However, only two of the species, S. austriaca and S. dudleyi, are found in Minnesota. 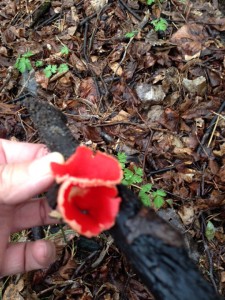