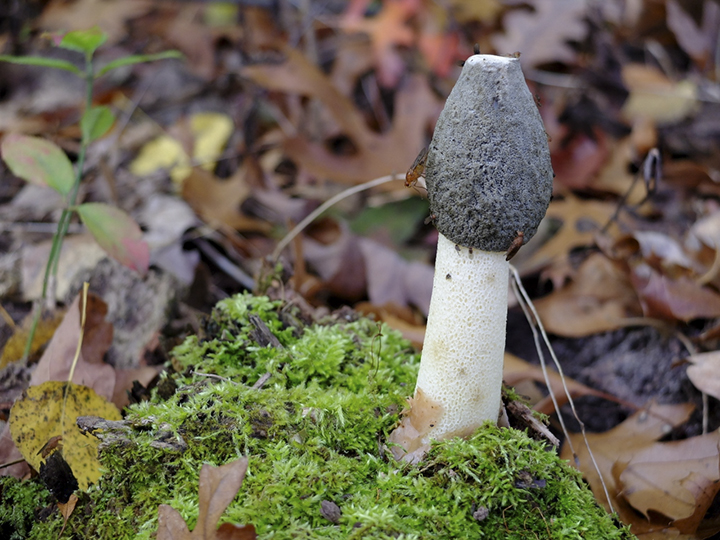 Ravenel’s Stinkhorn (Phallus ravenelii) is a common and widespread mushroom in gardens, lawns, meadows, cultivated areas, and woodlands of eastern North America. It is found from August through October, singly or in clusters, on the ground or on well rotted stumps, logs, wood chips, or sawdust.

The fruiting body at first is white to pinkish and egg-shaped, resembling a puffball. When conditions are right the “egg” ruptures and expands rapidly, sometimes in as little as one hour, producing a 4″ to 6″ tall, distinctly phallic structure with a stalk and thimble-like head. The rapid expansion is possible because all of the parts are fully formed and compressed inside the “egg”, and because the individual cells elongate, rather than new cells being produced. As the stinkhorn expands the gelatinous layer mixes with the spore mass producing a shiny, putrid slime that covers the cap. The foul-smelling slime is irresistible to flies, which feed on it, lay their eggs in it, and transfer spores when they fly to other stinkhorns.

Like all stinkhorns, this mushroom is edible. However, the slimy consistency inside the “egg” and the putrid odor the mature mushroom are enough to dissuade most from collecting it for the table.