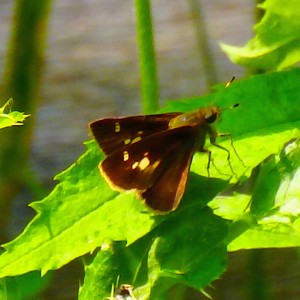 Little glassywing (Pompeius verna) is a medium-sized grass skipper with a wingspan of 11 ⁄16″ to 1½″. It is common in much of the eastern half of the United States but uncommon in the Upper Midwest, including Minnesota. The caterpillar of this species feeds exclusively on the leaves of purpletop tridens. It creates a shelter by rolling up one leaf of the grass or tying adjacent leaves together with silk. It remains in the shelter during the daytime, coming out only at night to feed, overwinters in it, and pupates in it the following spring.

Little glassywing is similar in appearance to Dun skipper (Euphyes vestris) and northern broken-dash (Wallengrenia egeremet). These three species are called “the three witches” because their dark wings make it difficult to tell “which one is which.” Little glassywing is distinguished by the large, rectangular or square, semi-transparent (“glassy”) spot on the forewing; a row of very pale spots on the underside of the hindwing; and a white band just below the swollen tip of the antenna.