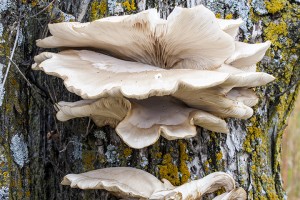 Oyster Mushroom (Pleurotus ostreatus) is a large, common, widespread, and widely known bracket (shelf-like) fungus. This mushroom is found usually on hardwoods, especially elm, cottonwood, alder, and oak. It is rarely found on conifers. It usually appears as overlapping shelves on a log or stump, sometimes on a live tree. It enters the tree through a wound and infects the wood causing white rot. It first appears in the fall after a heavy rain.

There are many mushrooms with a similar growth habit and appearance. This species is identified by growing on wood in shelf-like clusters; large size; absent or rudimentary stem; whitish or pale lilac spore print; host species; and late (fall) appearance.