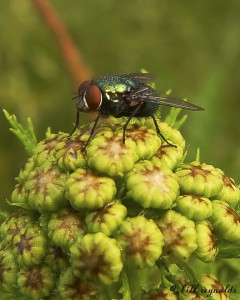 This is often one of the first insects to visit a corpse, sometimes within minutes of death. Forensic scientists use the development of the larva of this species to determine the age of a corpse. Medicinally, the larvae are used on humans to painlessly remove dead or decaying tissue from wounds while leaving healthy tissue untouched and secreting a chemical that promotes tissue regeneration.

This species is identified by three grooves across the thorax and three bristles on the upper middle (dorsal) surface of the middle thoracic section.