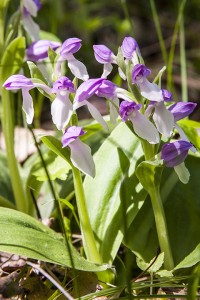 Showy orchis (Galearis spectabilis) is occasional in moist, rich, deciduous woods in the Eastern Broadleaf Province ecological region. In Minnesota, that includes the southeast and metro areas and continues northwest to Becker County. The plant is becoming less common as its preferred habitat disappears.

Though showy orchis is the first orchid to flower in the spring in Minnesota, the plant is often overlooked. In its first year the plant produces a single aboveground leaf and a new underground tuber and roots. The leaves die back in October or November. In subsequent years two leaves are produced. After four to six years it finally produces a single flowering stem.

There are two species of Galearis in North America, and both are found in Minnesota. Showy orchis is distinguished by the leaves, the lower petal (lip) of the flower, and the habitat where it is found. There are two basal leaves on a flowering plant. The lip is more than ⅜″ long, is white with no spots, and is not lobed. It occurs only in moist, rich, deciduous woods.