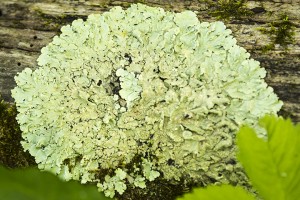 Common Greenshield Lichen (Flavoparmelia caperata) is a widespread and extremely common lichen. It is found firmly attached to the bark of broadleaved trees, fenceposts, and occasionally to rocks. It appears as a yellowish-green disk, 2″ to 8″ in diameter, divided into numerous irregular lobes.

Unlike most lichens, Greenshield lichens (Flavoparmelia spp.) are relatively tolerant of air pollution. They are among the first noticeable lichens to return to areas that have been rid of lichens due to pollution.

The Greenshield lichens are similar in appearance. Common Greenshield Lichen is identified by its substrate, which is usually tree bark or a fence post; and by the upper surface, which does not have white pores or pustule-like growths.