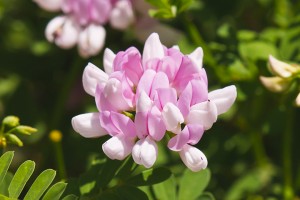 Crown vetch (Securigera varia), native to Western Asia and Europe, was introduced into North America in 1869. It is now found in every state except Alaska. It has been planted extensively since the 1950s on highway embankments in the upper two thirds of the United States to prevent erosion. The practice is now discouraged because its dense colonies often hide rather then prevent soil erosion. It has been used since the 1970s to revegetate abandoned mining sites. It has been and still is planted in gardens as an ornamental. It readily escapes cultivation. Once established, it takes a combination of methods and several years to eradicate.

When in flower there is no similar species. In its vegetative state it appears similar to species in the Vicia and Lathyrus genera. Securigera is distinguished by the absence of tendrils; a terminal leaflet; an umbrella-like inflorescence; and fruits that break into one-seeded segments at maturity. Crown vetch is the only species of Securigera that is found in Minnesota.