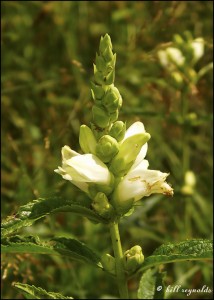 White turtlehead (Chelone glabra) is an uncommon native perennial. It is found throughout the eastern half of Minnesota in wet meadows, open wet woodlands, sedge meadows, and marshes, often at the side of a stream. It is most easily recognized in July to September when it is topped with a spike of a few to many white flowers. The flowers are said to resemble the head of a turtle, giving this plant its common name.

The plant is highly variable and some authorities recognize up to eight subspecies.