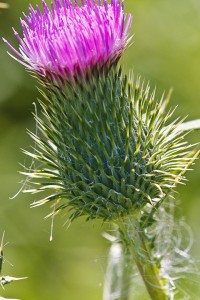 Bull thistle (Cirsium vulgare) is native to Northern Africa, Asia, and Europe. It is thought to have been introduced into North America by European settlers, possibly as a seed contaminant, in the early 1800s. It is now present in every state in the U.S. and every county in Minnesota. It is a prohibited weed seed in Minnesota but it is not considered as serious a threat as other invasive thistles. The spiny foliage makes it unpalatable to wildlife and livestock. It reproduces by seed only, not vegetatively. About 95% of the seeds germinate but few plants survive to maturity. Seeds that do not germinate in the first spring do not survive the following winter unless they are buried. Seeds that are buried at least 5 inches, as in cropland under cultivation, remain viable for only 3 years.

This species is identified by the distinctive three dimensional appearance of the rosette leaves; the spiny wings on the stem that are continuous nearly to the leaf below; the leaves that are cut more than half way to the midrib; the few large flower heads; and the phyllaries that are long tapered and curve outward. Other thistles in Minnesota share one or two of the latter three characteristics, but none share all three.