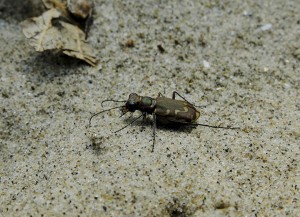 Bronzed tiger beetle (Cicindela repanda) is one of the most common species of tiger beetle in North America. It is found in open, sunny areas with little vegetation next to a stream or river. It is active during the day but is a fast runner, difficult to catch or photograph. The larva can be seen on the ground, anchored to the mouth of its tunnel, waiting for any insect unlucky enough to pass by.

This species is identified most easily by the pale markings on its wing coverings (elytra). The crescent-shaped mark in the forward area (closest to the head) on one elytra points to the one opposite, and is connected to, or only narrowly separated from, the mark on the margin of the middle area. Also, the vaguely S-shaped mark in the middle area is complete, not broken.