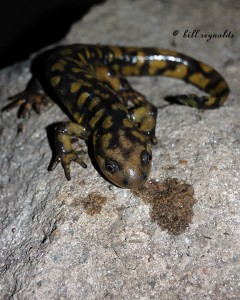 Eastern tiger salamander (Ambystoma tigrinum) is the largest terrestrial salamander in Minnesota. Adults are usually 6¾″ to 8⅝″ in length but have been found as much as 13¾″ long. It is common throughout the state except in the arrowhead region, where it has not been recorded after 1960. It is found in prairies, woodlands, agricultural and residential areas – pretty much everywhere. It is a voracious feeder, eating any animal small enough to be captured and swallowed.

Like all salamanders, eastern tiger salamander is rarely encountered by humans. It is occasionally found in window wells and damp basements, and is sometimes seen above ground at night during and after a rainfall in the spring breeding season.