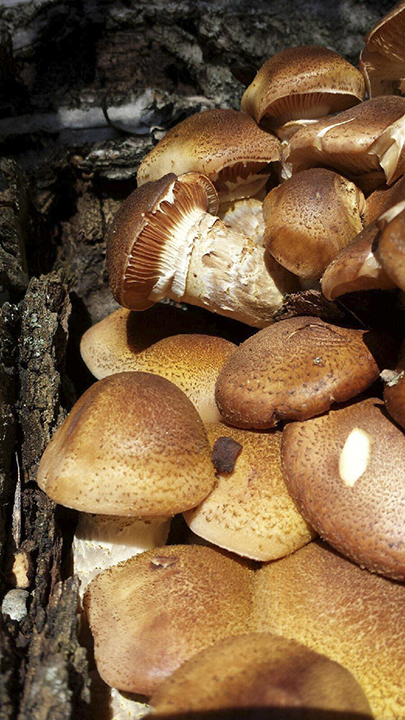 Honey Mushroom (Armillaria mellea group) is a common and very widespread, extremely variable group of closely related gill mushrooms. It is found around the globe in the northern temperate zones and has been introduced in South Africa.

At least 14 varieties of Honey Mushroom have been described. Several characteristics are relatively constant. It usually appears in small to massive clusters on stumps or logs, on the lower trunk of living trees, or on the ground growing on tree roots. On young mushrooms the gills are covered with a Kleenex-like, cottony, membranous tissue. On the cap there are usually tiny brown scales, most dense in the center and more or less radiating outward. The stalk is tough, and fibrous, tapered to the base when in clusters, expanded at the base when solitary. The flesh is bitter when raw. The spores are white and white spore dust can be seen on lower mushrooms in large mature clusters.