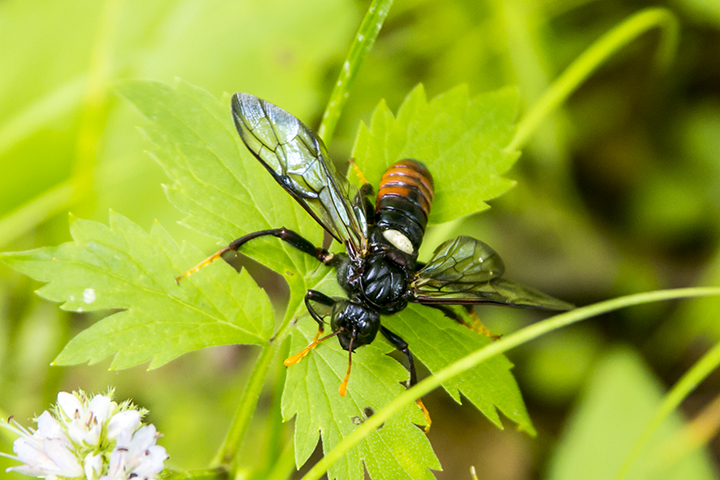 There are about 9,000 living species of sawflies worldwide. Elm sawfly (Cimbex americana) is the largest sawfly in North America. Adults are found in woodlands across the continent from mid-May to mid-August. As the common name suggests, they feed mostly on elm and willow, but also other hardwoods including maple, birch, and American basswood. Larvae feed on the leaves. Adults use their powerful mandibles to cut horizontal gashes in the bark of twigs and small branchlets in order to feed on sap. They sometimes girdle the limb, causing it to die. They can cause sporadic defoliation but are not considered forest pests.

Sawflies are not flies. True flies (order Diptera) have just one pair of wings. Sawflies have two pairs of wings and are more closely related to ants, bees, and wasps (order Hymenoptera). Adults are distinguished by the parallel-sided body (not waisted like a wasp), and by special structures that help hold the forewings in place when at rest. Larvae are distinguished by six or more pairs or leg-like structures on the abdomen, and a smooth head with no cleavage line.

Elm sawfly is identified by the large size and orange, slightly clubbed antennae with 7 or fewer segments.