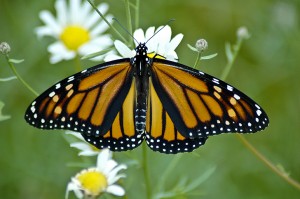 This year, 2014, is going to be another bad year for the monarch (Danaus plexippus).

The population of monarchs has declined precipitously in the last two years. It began in 2012 with an unusually warm March, followed by a normally cool April, then an extremely hot and dry summer. That winter saw only 60 million monarchs visiting their overwintering sites in the forests of Mexico. That was down from 350 million the previous winter. 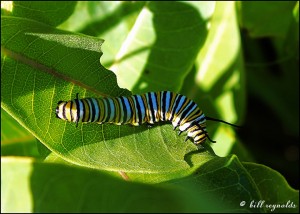 Other factors contributing to the population decline include deforestation of the oyamel fir forests in Mexico, loss of habitat in the United States, and the effects of the unusually cold spring on the milkweeds in Texas.

In December 2013, the WWF-Telcel Alliance and Mexico’s National Commission for Protected Areas conducted a survey of Mexico’s Monarch Butterfly Biosphere Reserve. Hibernating butterflies occupied only 1.65 acres of the reserve. That was a 44% drop from 2012, when 2.76 acres were covered.

My own observation is that for most of the last decade the monarch has been ubiquitous throughout the state. There was hardly a site I visited where I did not see at least one. Seeing a monarch was as common an occurrence as seeing a common dandelion or hearing a Black-capped Chickadee – they were everywhere. In 2013 monarch sightings were, if not uncommon, at least much less frequent than in recent years. 2014 promises even fewer sightings.

Another migratory butterfly, the red admiral, was uncommon in 2013 after being very common in 2012.