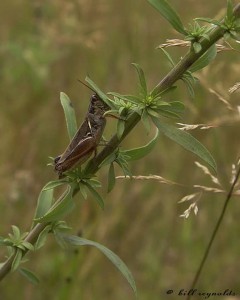 Migratory grasshopper (Melanoplus sanguinipes) is a common, medium-sized, spur-throated, short-horned grasshopper. It may be the most common species of grasshopper in North American grasslands. It is a serious agricultural pest, causing more crop damage than any other species of grasshopper in North America. As its common name implies, the migratory grasshopper congregates into swarms and migrates in search of food. When they do they may devastate all leafy vegetation wherever they land. Swarms have been detected at all elevations up to 13,000 feet and have been recorded traveling as much as 575 miles.

The family short-horned grasshoppers have antennae no more than half the length of the body, upper thoracic plate (pronotum) not extending over the abdomen, well developed wings, and a three segmented foot. The subfamily spur-throated grasshoppers have a tiny bump on their “throat”; a flat, rounded pronotum; a vertical face; a clear hindwings. This species is identified by hind wings that are longer than the body; front wings that are about as long as the body and are mostly transparent but have dark spots; a pale yellow stripe behind the eye; a banded hind femur; and features at the tip of the abdomen visible only in an extreme close-up photo.