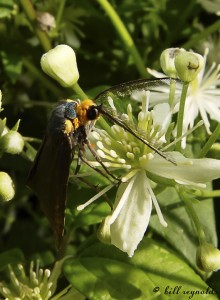 Virginia ctenucha (Ctenucha virginica),  a common and widespread, colorful, medium-sized moth, is the largest wasp moth in North America. It is found from mid-June to late July in moist, open, grassy fields and meadows. Although it is a day-flying moth it is also attracted to lights at night.

This and other Ctenuchid moths have three adaptations that help to protect them from predators: the metallic blue color of the body mimics wasps which may be noxious to predators; caterpillars retain toxic chemicals from the plants they eat; and a specialized region on the thorax produces ultrasonic sounds which jam the sonar of moth-eating bats.

This species is identified by the incomplete yellowish-orange collar and the broad wings with no markings.