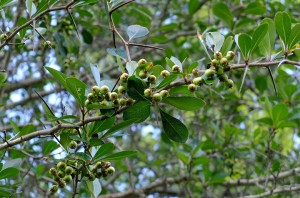 Depending on who you ask, there are 9 (or 10) species of hawthorn in Minnesota, not including 2 (or 3) species that haven’t been seen in the state in the last 50 (or 100) years. Cockspur hawthorn (Crataegus crus-galli) is in neither group, though the USDA shows Minnesota as part of the native range of this species.

Cockspur hawthorn is most similar to dotted hawthorn (Crataegus punctata). It is distinguished by its leaves, which are hairless. In addition, the upper leaf surface is shiny and does not have impressed veins.