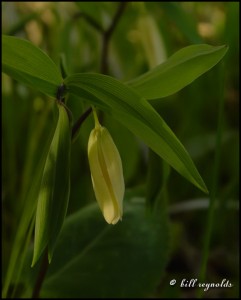 Wild oats (Uvularia sessilifolia) is native to the eastern half of North America. In Minnesota it blooms in April and May in the edges and openings of moderately moist forests. The leaves are stalkless but do not surround the stem at the base. A solitary, cream-colored flower is produced near the end of the stem but is easy to miss. The flower has three petals and three petal-like sepals (six tepals). It droops downward near the end of the stem and is somewhat concealed by immature, drooping leaves. In late spring the flower is replaced by a greenish to egg- or pyramid-shaped, yellowish-brown, three-celled capsule.

Wild oats is much less common than its close relative, large flowered bellwort. The latter is a taller plant with larger leaves that surround the stem at the base, up to three flowers per plant, and yellow, twisted tepals.