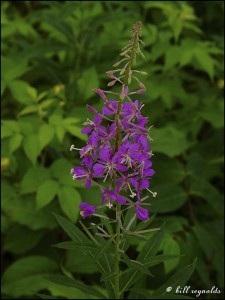 Fireweed (Chamerion angustifolium) is a native, highly variable, widespread species. It is found throughout the circumboreal region of the globe including 43 states in the U.S. and every province of Canada.

Fireweed is a successional plant occurring in disturbed areas especially after a fire. It spreads aggressively by rhizome-like roots, often forming large colonies and becoming the dominant species.