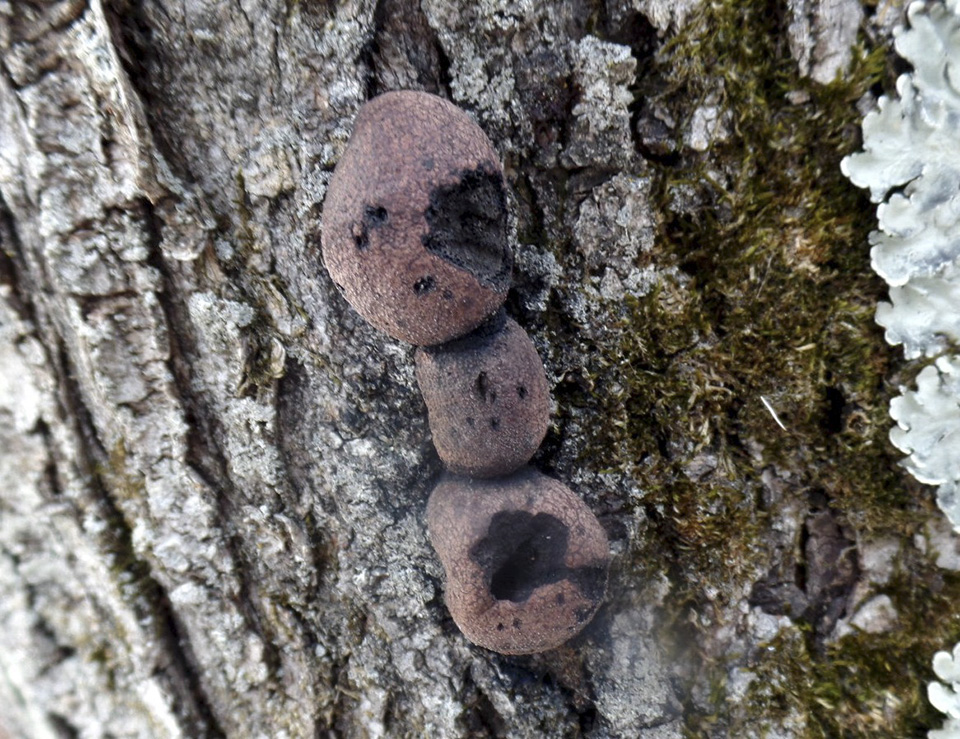 King Alfred’s Cakes (Daldinia concentrica) is a common fungus that occurs on all continents except Greenland and Antarctica. It grows on dead or dying deciduous wood, especially ash. The fruiting body is ball-shaped, stalkless, and hard. It is brown when young, black and shiny when mature. The surface is densely covered with minute, pimply bumps. These bumps are tiny, spore-bearing chambers just under the surface. When the spores are mature they burst open during the night and eject up to an inch or more large numbers of black spores. These spores are often visible on the bark near the fungus long after they have worn off the fruiting body.

The common name King Alfred’s Cakes refers to a story told about a British monarch. King Alfred fled from a battle and took refuge in a peasant woman’s house. The woman asked him to watch her cakes in the oven. Preoccupied with his own troubles, he let the cakes burn. This earned him a scolding from the woman who did not know her visitor was the king.

King Alfred’s Cakes is also called Coal Fungus, but not just for its appearance. An older, black specimen, when broken to expose the interior, will readily take a spark from a fire steel. Blow on the glowing spark and it will grow in size. Left alone, it will smolder for a long time. Placed against dry tinder and blown upon, it will ignite a fire. Another common name, “Cramp Balls”, refers to the belief that when carried in a pocket it can prevent or cure leg cramps.