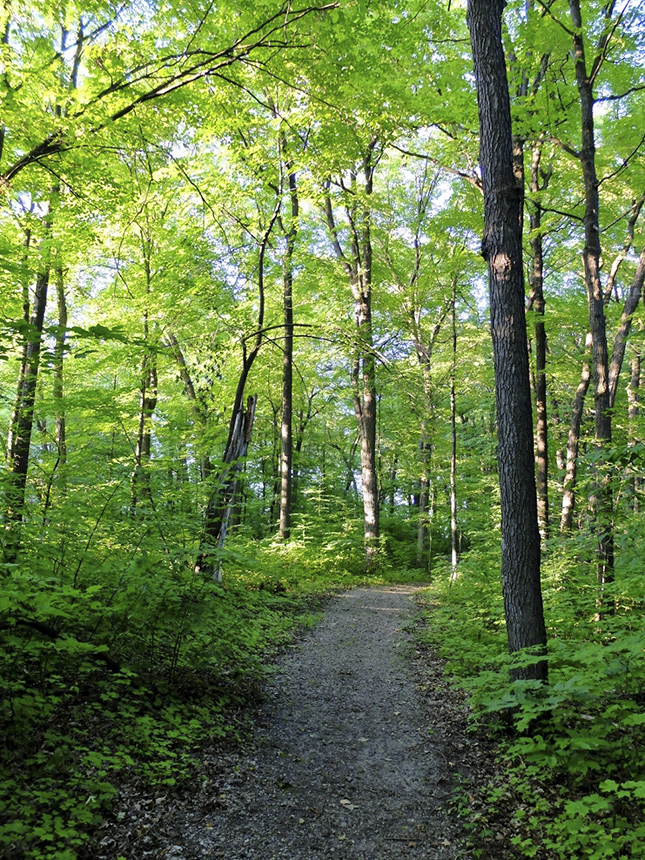 When settlers started arriving in south-central Minnesota in the 1800’s, they encountered a large stretch of forest about 100 miles long and 40 miles wide, basically from what is now Mankato to Monticello. The predominant mix of trees was elm, sugar maple, basswood, and oak, which contrasted with the surrounding prairies, savannas, and brushier oak and aspen woodlands. In the 1700’s, French explorers called this region bois grand, which translates to the commonly used English name – Big Woods. There is a similar region in western Wisconsin, and part of this area near Lake Pepin is the setting for Laura Ingalls Wilder’s first book, Little House in the Big Woods. Over the years, the increase of farming and real estate development has reduced the Big Woods to scattered remnants and secondary stands that are mainly preserved in parks and other protected areas – about 2% of the original expanse. Nerstrand-Big Woods State Park is one of the most pristine fragments. Another well-preserved remnant is Henry’s Woods Park in Rogers, MN.

An article in the July-August 1998 edition of The Minnesota Volunteer talks more about the Big Woods and features the Henrys’ farm. Rising taxes and land values encouraged many land owners to sell their land to developers, but the Henrys instead wanted to preserve their 60-acre forest as a memorial to Lloyd’s grandparents who bought the farm shortly after the Civil War (it was Hassan Township at the time). Eventually, the current 52-acre site was gifted to Hassan Township (now Rogers), and it is permanently protected in conjunction with the Minnesota Land Trust. The main parking area is off Brockton Lane, and the first things you see are a circle garden in the middle of the parking area and a restored farm building near the trailhead by the woods. A large polished stone marker in the middle of the garden talks about the Henrys’ gift and the history of the woods. The Henrys not only farmed the area, they also had a sawmill and used the woods for lumber and firewood. In addition, they tapped the maple trees each spring and made maple syrup; the preserved building on site is the Henrys’ “sugar shack” where they made the syrup. When you enter the woods, the trail starts as minimally graveled, but then turns to bare earth as it loops through the woods. A bridge crosses over a small stream, and there are two small ponds with wood duck boxes. It’s a tranquil spot not far from a large commercial/retail area. A trip to Cabela’s could result in a purchase of hiking shoes and an opportunity to use them right away at Henry’s Woods.

Text and photo by Kirk Nelson