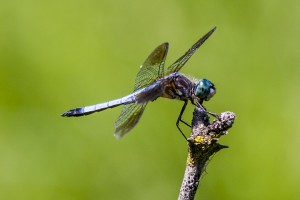 Blue dasher (Pachydiplax longipennis) is a widespread, fairly common, small to medium-sized skimmer. It is found from early June to early September near lakes, ponds, slow streams, ditches, and possibly bogs. It perches on erect, slender plant stems. When perched the wings are lowered. Males joust over water by flying under an opponent and rising, forcing the opponent away from the water surface.

Blue dasher is identified by the powdery blue pruinescence on the tapered abdomen; blackish-brown and yellow striped thorax with no pruinescence; white face; and green or blue eyes. 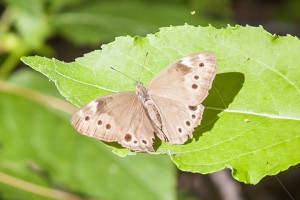 Northern pearly eye (Lethe anthedon) is a common, medium-sized, brown butterfly. It is found from late-June to late August in grassy edges and openings, dirt roads and trails in mature deciduous woodlands and forests, usually near streams, rivers, or marshes. They often perch upside down on tree trunks. Their wings are usually held together above the body, opening only occasionally and briefly.

The wings are brown or brownish gray with a row of dark eyespots near the margin. The spots on the underside of each wing have a white “pearly” center. 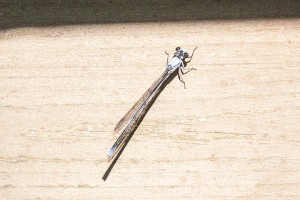 Powdered dancer (Argia moesta) is a common and widespread, medium to large sized damselfly. At 1½″ to 1¾″ it is the largest dancer damselfly and the largest narrow-winged or pond damselfly. It can be found from early June to early September on streams and rivers with emergent rocks and large lakes with rocky shores.

Unlike American bluet damselflies, dancer damselflies are easy to identify in the field by their colors and the pattern of their markings. Powdered dancer is distinguished by the whitish pruinescence on the male, a characteristic unique among Minnesota damselflies. The female is similar to the blue-fronted dancer but is larger and has a paler abdomen tip. 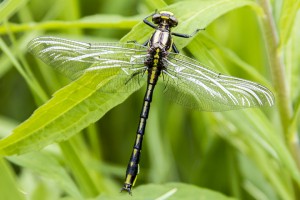 Midland clubtail (Gomphus fraternus) is an uncommon, early season, medium-sized clubtail. It is found from early June to late July by moderately to fast flowing rivers and large streams, and by large lakes with emergent vegetation. When the adult hunts it perches on the ground or a rock on a bank or shoreline. It is a very strong flier and often patrols open water far from land.

Clubtails (family Gomphidae) are distinguished by expanded abdominal segments 8 and 9 forming a “club”, clear wings with no dark patches, forewing and hindwing triangles similar in size, and eyes that do not meet at the top of the head. Midland clubtail is identified by the moderate-sized club only slightly narrower than the thorax; lack of a black horizontal stripe on the face; and lack of pale dorsal spots on abdominal segments 8 and 9. 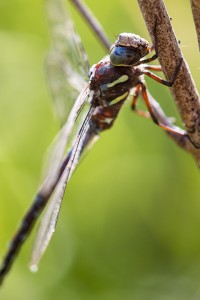 Shadow darner (Aeshna umbrosa) is a large, common and widespread, mosaic darner. It occurs throughout North America except in the arid southwest and, for some reason, Newfoundland. It is found from late June to late October in shaded areas alongside slow streams, ponds, and swamps. Only the autumn meadowhawk flies later in the year. Adults hunt mostly in the shade and mostly at dusk.

Mosaic darners are similar in size and appearance so a close examination or good photos are required for identification. This species is identified by the absence of a black horizontal stripe across the face; yellow thoracic stripes; relatively straight first thoracic stripe with an extension at the top; pale blue abdominal spots that are smaller than other other mosaic darners; wedge-type claspers on the male; and preference for flying at dusk and in the shade. 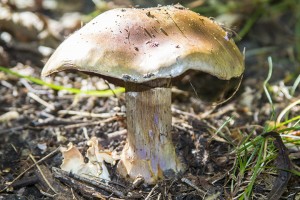 Wood Blewit (Clitocybe nuda) is very common and widespread. It is popular with mushroom foragers because it is plentiful and edible. It is found on the ground, often found in rings or arcs, in woodlands, gardens, and compost piles. It appears mostly in the cool months from September to December but may appear in spring and summer.

This species is identified by growing on the ground in woods; its large size; thick stalk; purplish cap, stem and gills fading to brown with age; and pale spore print. 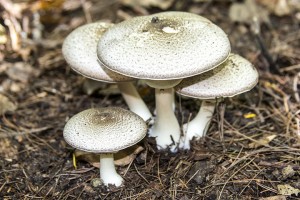 Eastern Flat-topped Agaricus (Agaricus placomyces), a widespread but not common mushroom, is easily recognized by it’s flat cap with blackish-brown fibers and scales. It is found from July to October on the ground, either singly or in groups or clusters, under hardwood trees in deciduous and mixed forests. It obtains its nutrients from decaying organic matter. It appears in the summer and fall. It is poisonous, not edible.